Words have power. They can shape someone’s imagination, place ideas in their head, form concrete “memories”, and shape perceptions. Of course, used incorrectly, words can also distort reality. Researchers Elizabeth Lofter and John Palmer explored this in their study Reconstruction of Automobile Destruction: An Example of the Interaction between Language and Memory.

Lofter and Palmer asked volunteers to watch videos of staged automobile accidents. Later they asked their subjects questions to gauge how their responses would vary based on the researchers’ language used. The results provided keen insight into the power of words.

The First Experiment – Speed and Language

Estimating how fast a vehicle is traveling just by eyeballing it is far from an exact science. However, the estimates for the volunteers who participated in the study weren’t merely influenced by the inaccuracy of guesswork, but by the description the researchers used.

… as the words increased in intensity, so did the estimates of how fast the cars were travelling …

The answers the researchers received appeared to be directly related to the term used to describe the vehicle impact. Mild language like “contacted” yielded a speed estimate average of 31.8 mph, while more aggressive terms like “smashed” elicited an average guess of 40.5 mph. In fact, as the words increased in intensity, so did the estimates of how fast the cars were travelling — even though the actual speed hadn’t changed.

This experiment shows a direct connection between how people perceive a situation, and how that perception is altered based on language used to describe it.

The Second Experiment – The Creation of “Memory”

In Lofter and Palmer’s second experiment, participants were again asked about a recorded automobile accident. This time, the researchers wanted to know if the participants had noticed any broken glass when the collision took place.

Spoiler alert — there was never any broken glass recorded in the clips. The videos of the automobile accidents remained consistent for all the viewers, and none contained any broken glass as far as the audience could tell. Yet in spite of this fact, the volunteers in this experiment once again had different answers that coincided with the words used to describe the accidents.

… more than double the previous number, believed there was broken glass …

When the term “hit” was chosen in reference to the collision, 7 participants mistakenly believed they saw broken glass, while 43 said they saw no broken glass. In a second group, when the term “smashed” was used this result changed dramatically. A full 16 participants, more than double the previous number, believed there was broken glass present in the video while 34 did not. The control group reported similar numbers to the “hit” group, with six thinking they saw glass, and 44 saying they did not.

What’s interesting about these results is that no matter the group or language used, a significant faction was always mistaken about what they witnessed. This faction grew dramatically in size when the words used by the experimenters increased in intensity.

Lofter and Palmer’s experiment points to some interesting conclusions. Not only can language exaggerate an event in a person’s mind, but it also appears that it can completely alter their memory.

While this experiment shed light on the veracity of witness testimony in the court room, it also has implications for sales and marketing. Words have a profound ability to influence customer behavior! The key is to test variations of descriptors in your copy to see what is optimal. 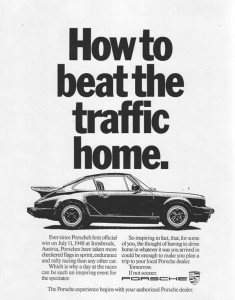 In the advertisement at right, you could experiment with the following versions of the headline:

Choose your words carefully as each variation of the headline will elicit a different response. Your job is to test, test, and test to find the one that will pull the best results for you.